If ever there were such a thing as a sport climber’s paradise, then Kalymnos would be it.

With over 2,000 bolted routes, 50 miles of island to explore, and water so clear you can see all the way to the bottom, Kalymnos had been on our climbing wish list for nearly a decade.

Kalymnos is known for its long, limestone routes that are soft and slabby on the bottom,  pumpy and cruxy up top, and sharp all over!  Be prepared to climb with endurance and efficiency, and be sure to save your power for the penultimate and ultimate bolts.

Come equipped with a helmet, 70, 80 or 100 (!!) meter rope,  and 14 quickdraws per climber (up to 28 per couple).  This might sound like overkill for single-pitch sport climbing, but they sure come in handy for those 40-50 meter mega-pitch climbs for which Kalymnos is so well known.

Autumn in Kalymnos is arguably the best season to climb, with optimal sending temperatures and mid-low season prices on accommodations.  Early October seemed to be a bit hit with climbers from all over the world, and we were blessed and impressed with the weather. 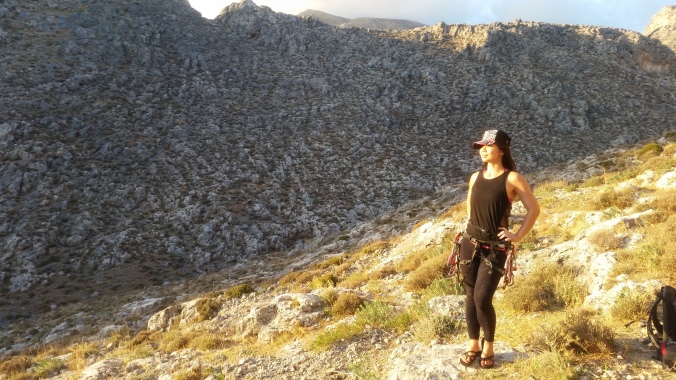 How to Get There:

Fly to Kalymnos (JKL) airport from Athens (ATH) with Olympic Air for $100 return.  Alternatively, fly to Kos International Airport (KGS) and take a ferry to Kalymnos.

Make Massouri your base camp for exploring local crags in the area, as many climbs are within walking distance.

We highly recommend renting a car and venturing north towards Skalia and Emporios, and taking the boat ride out to Telendos to experience all the climbing the islands have to offer.

On the Rocks (Telendos)

Plaza Hotel in Massouri boasts stunning sunset views of Telendos across the sea with clean rooms,  and pool, beach, and balcony access.

It was well worth the wait.