Megan Sullivan’s business card says that she is a Producer and Director for an internal production company within an advertising agency, but she is basically a dirtbag who lives in the city of San Francisco and travels to wherever possible as much as possible.

BB: We’re enamored with your 7 Wonders of the World in 13 Days project and you’ve been such an inspiration to us. Tell us about your incredible journey over the past year, and what keeps you going.

MS: The year started interesting to say the least… I had been training for basically three years to do the Nose route on El Cap… only to fall 50-feet 2000 feet up.

After a fall like that you start to question everything… from why am I putting myself into these scary situations to what is driving me to seek out these ambitious climbs… basically what am I trying to prove to myself… or to the world?

I wondered for a while if it was an ego driven passion; my first climbing partner told me, actually laughed at me and said that I wouldn’t be able to climb the Nose. Granted, I had only been climbing trad for a year, and I hadn’t even tried aid yet… but, it was the motivation I needed to prove him wrong. So for the next two years, I trained and was a dirtbag basically every weekend finding any partner that was available with one goal in mind.

As I was falling, there was this space in time to realize that something had gone wrong. Seeing granite… then sky, then granite again, I knew that this was it, and that hopefully it would end fast so I wouldn’t feel anything.

Then I was caught, looking down in the eyes of my partner who was in sheer panic… I survived.

Like something out of a movie… I was then hit by a car riding my Vespa a week later and then diagnosed with skin cancer the week after that…. so in a months time I basically was handed the trifecta of bad luck based on my life decisions that I had been making.

I think that most would lock themselves in a room after that, but I realized something pretty significant… I survived. The greatest learning moments that I believe anyone will have is when they are at the bottom… because from that point on you realize that (and not to sound like a PSA here) but that you can only go up from there.
So there I was… in December after what would for most people be the worst November of their lives… but for me… it was the greatest learning experience I have had to date.

I survived and I will keep on surviving (obviously learning from prior events)… but that this is not the time to stop, this is just the beginning.

It only seemed fitting that I met this boy who asked me after the cancer diagnoses, “what is something that you have always wanted to do?” My answer…. visit the 7 wonders of the world in one trip.

We left soon after that, and we really haven’t stopped. Basically, living with the mentality to pursue every passion we have ever wanted to and not letting excuses get in the way of those dreams.

BB: How has traveling around the world in search of the next adventure changed you?

MS: I wouldn’t use the word “change”, but it awakened me. Think of your 15-year-old self… possibilities were endless for your future had yet to be defined. Then in your twenties you get into the rhythm and think: ‘ok I need to get a job, be responsible, grow up.’ For some reason those dreams that you had go to the back burner because for some reason you are led to believe that you can’t dream like you once did…. that there isn’t enough time in the day… that you couldn’t possibly drive 9 hours on a Friday night to explore something truly extraordinary on Saturday… but when you were 15 you believed that.

I’ve learned a lot in the past 15 years, but I am living more like my ambitious 15-year-old self now.

BB: We love the post you shared on Instagram behind the importance of self-care and preparing for the next 60 adventurous years to come. What does #livemorenow mean to you?

MS: Wear Sunscreen… but seriously… do it. A tan is an awesome thing to have, but its not worth looking like leather when you are 50. Plus if you have an event or something, you can fake it 🙂 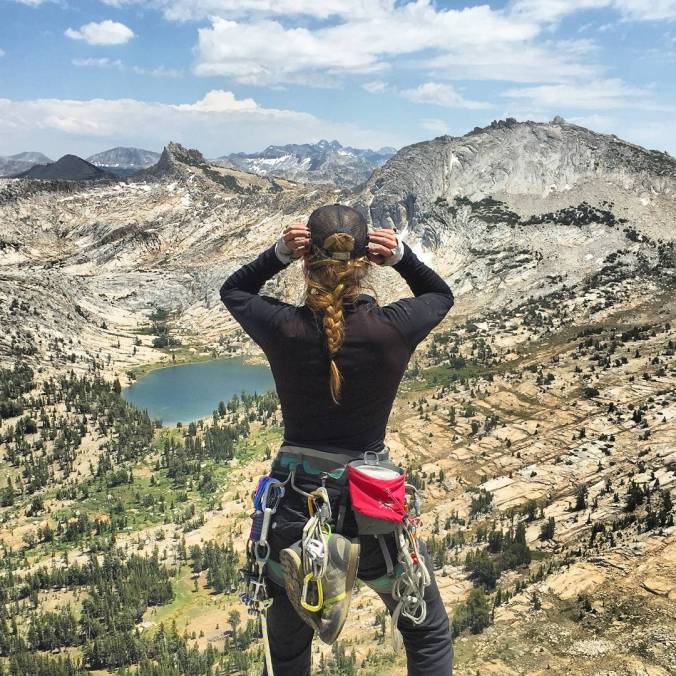 BB: How did you and rock climbing find one another?

I had moved down to San Luis Obispo from Washington State a while back for a past relationship. Then 5 years ago when we broke up. I found myself with zero savings; I think that I had $500 to my name, living with a friend, and couldn’t be happier. For I felt like I was given a new opportunity to start over. A year later, I met some friends who were climbers, and soon after that I went on my first trip to Bishop, followed by Joshua Tree and then Yosemite… I was hooked.

BB: How has climbing empowered you in other areas of your life?

MS: There is something about looking up and seeing something so magnificently ginormous that it seems impossible to summit… but then you do. That feeling leaves you with the ability that you can accomplish anything… that feeling then becomes contagious across all verticals in our lives and ultimately leads to the feeling of great empowerment.

BB: You’ve traveled all over the world to beautiful places. If you had to pick one that holds a special place in your heart, which would it be?.

BB: What inspires Meg the Legend?

MS: Everything around me.

BB: Your recent building adventures look rad. What is buildering, and how did you start taking it up?

MS: Buildering is basically bouldering on buildings. I think that I started as a toddler… but more recently found some really cool buildings to climb in San Francisco — and I have only been escorted off of a property by 3 security guys once.

BB: What advice would you give to someone to strive in the face of unexpected challenges?

MS: You will hit a point in your life when you think that there is no way that it could get any worse… until it does. Then the greatest moment arrives when you wake up one day to realize that you survived, and you were able to get through that moment even though at the time you never thought it possible.

You hold the power to decided how you are going to live each day, so you might as well make it the greatest day of your life.

BB: Where to next?

MS: Yosemite and then Hong Kong for Labor Day Weekend!